Blog
You are here: Home1 / Blog2 / Articles3 / FEELING SLUGGISH FROM YOUR BEAUTIFUL LAWN 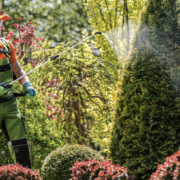 Do you have those days when you feel less than energized? It seems like more people are having that same tired feeling more often, especially in the spring. Stress could be an energy factor but that’s not what I’m talking about here. And aren’t we supposed to feel better with all the sunshine this time of year?  So just what do you think would be the cause of eternal sluggishness? You might think unhealthy food might be the culprit. It certainly can and I speak plenty about that in my book “Healed by Farm” but what I’m talking about here is a different kind of poisoning, chemical poisoning! You might think you are spared from that because there are no factories near your home. No major roads, trains, or shopping center pollutants either. It’s possible you live like most Americans all tucked safely away, in your subdivision! The comfort of your own home is certainly not somewhere you would think you could get pre-autoimmune disease symptoms.

Children from days past played in yards covered in weeds, clover, and bees! Most of the yards back then did not reflect the beautiful plush green (golf course like) grass of today’s yards. And unfortunately it seems we are finding out the hard way that the ways of the past were not such a bad way of living after all. In my professional opinion it seems we need to take a long hard look at the past, when some things were better. Everyone loves a beautiful yard, right? It certainly seems so when most of the western population competes for lawn dominance every spring like it’s a national sport! Ever notice how many of those yard sprayer trucks show up in your neighborhood every spring, every hour, every day for weeks. You may have also noticed the horrid smell of herbicides and pesticides, yes, chemicals. Would you let your precious children play on the floor of a dry cleaners? Absolutely not!! So when all of the neighborhood kids are playing outside in the grass supposedly living the good life but breathing air that smells like a fertilized golf course, there’s a problem! And that problem was paid for by none other, you! No blame here, we were told comforting words like it won’t hurt us, it’s the new formula, no problem, it’s all natural and approved etc. We were all tricked into believing that crop dusting our yards while breathing chemicalized air was healthy. Unfortunately we as trusting consumers have found out the hard way that breathing glyphosate and bug killer isn’t such a good idea after all. Some of these known carcinogens have been tied to almost every known cancer on the planet. Young mothers with thyroid problems might be surprised how these dangerous chemicals directly damage the thyroid, adrenal glands and many hormones that affect everything including sex, energy and sleep.

In the spring when the weather warms is when the neighborhoods are taken over by small tank trucks. Big hoses full of liquid poison are pulled around every house in the neighborhood while 100% of the soil is killed!!

Just think about your precious children breathing that poison into their lungs, for 60 days straight, every spring, and 60 more in the fall. These poisons don’t go away just because you can’t smell them indoors. You get used to the smell but your family is breathing it, every day, even as they sleep! And is it ok if your small children walk barefoot in toxic chemicals?  Childhood leukemia is skyrocketing out of control in America, is this the reason? I’m sure you don’t want to find out, the hard way! Chemical poisoning doesn’t always show up as a dreaded disease but could be causing your kids to have weak immune systems which lead to many more stomach and headaches, strep, bronchitis, pneumonia, diarrhea and constipation. Kids have these symptoms often, don’t overlook them!

Some so-called experts point the finger the wrong way about the disappearance of our honeybees but it’s an obvious fact that when the lands are soaking in pesticides, bees will die!

If you save your family’s health, you’ll save mother nature in the making, both are priceless!

PEOPLE WHO TELL YOU NOT TO EAT FRUIT, ARE FRUIT CAKES
Scroll to top