You are here: Home1 / About John 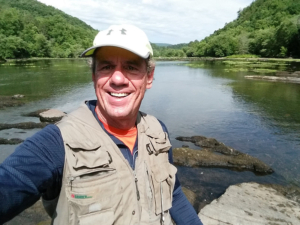 “John Rankin’s Way” is a remarkable story of how John Rankin reversed heart disease after a near-death experience.

He tells how he shocked his doctors from his initial survival and how he dramatically changed his blood tests in less than a year from heart-attack levels to those of a healthy child.

His success is credited to switching his eating habits to a natural basis like his ancestors did in the 1700s. Unlike what modern history reports–except for infant and early childhood mortalities – folks in those days often lived into their 90s.

John started eating the foods experts had warned for the past 75 years would cause heart disease. Nine months after the “attack,” John thought he would have to take himself off required heart stint lifetime maintenance medications when his doctor was so impressed with his healing progress and lab test results, he took him off all prescription medicines himself.

While most medical professionals would say this is nearly impossible, John continues to thrive in perfect health.

Before his heart attack, John had studied and followed the wisdom of the best diet and nutrition experts for more than 40 years, except for a few areas he now understands as vital to life. He had stopped eating healthy saturated fats, following the advice of conventional experts. He was addicted to sugar, just like most are. He had been a regular fitness junkie, working out five days a week and being active in outdoor adventures of every kind.

After living a healthy lifestyle for many years, then having the “attack,” John was puzzled: How could this have happened. That thought brought him to a new life purpose.

John is a self-made man, gifted and successful in developing businesses, allowing his family to live a comfortable life on their wooded property dubbed “Rankinshire.” It is there that he practices what he preaches, raising as much of his own food as possible and buying the rest from local farmers.

The beautiful hills and valleys of East Tennessee have been home to his family since the 1700s when the Rankin clan emigrated from Scotland and Ireland. Now he has been able to continue the family tradition of living off the land in a healthy lifestyle.

After John witnessed the deaths of his parents, brother, and other close relatives from diseases that he believes were caused by the industrialization of the American food industry, he is sharing the God-given truth about food to all who desire to improve their health.

He is finishing his first book, telling the story of how he was caught in the trap of the American processed-food revolution, which he believes is responsible for many areas of bad health. His beliefs are backed by major scientific studies, which he shares.

He has speaking engagements and he creates seminars to teach about “The John Rankin Way” to better health.

Many have changed their eating habits, healing illnesses by following “The John Rankin’s Way” of returning to Mother Nature’s pure diet.